skip to main | skip to sidebar

Hitting Strategy: Don't step into the batter's box without a hitting game plan

It is widely acknowledged that hitting a baseball is one of the most difficult tasks in all of sports. Standing in the batters box 60 feet 6 inches away from the pitcher whom throws a white 3 inch baseball across a 17 inch plate at speeds up to 90+ mph with only a 33 inch bat possessing a sweet spot of 3. 7 inches can cause anxiety for many players. When you factor in the potential for pitches of different speeds, locations, and movements, as well as the 8 other position players behind the pitcher who's primary job is to defend against those hitters skilled enough to put a ball in play, it is a wonder that hitters are ever successful.

The pitcher clearly has the advantage. However, with a good hitting strategy, you can improve your performance and subsequent enjoyment in the aforementioned situation.

What I find at the high school level, is that hitters don't have a consistent hitting game plan and end up getting themselves out. In spite of the pitchers ability, the hitters are unsuccessful offensively by swinging at pitches out of the strike zone, failing to recognize hitters counts versus pitchers counts, and giving up the outside part of the plate which prevents the team from scoring runs and directly impacts wins and losses.

My goal within the next few paragraphs is to equip you with the framework for a hitting strategy and a hitting game plan where you will a)have an aggressive swing thought b) attack fastballs in the strike zone on hitters counts c) narrow your plate coverage to play the percentages and d) predict pitch type and location based on data and tendencies. As with all aspects of your skill development, this strategy/hitting approach must be practiced with discipline and commitment.

A) Aggressive swing thought- Successful hitting requires aggressiveness. For a 90 mph fastball, the hitter has approximately 1/4 of a second to see the pitch, determine it's spin, speed and location, and start the swing. No time for wasted motion or thought. The batter must approach each pitch with an aggressive "go" swing thought. He does not have time evaluate the pitch and then make two decisions (swing or not to swing). Instead, he commits each at bat to swing unless his assessment of the pitch tells him to not swing. So when you enter the batters box, commit to swinging at the pitch and use the 1/4 of a second to stop yourself if it warrants (one decision instead of two).

By their own admission, hitters hit the fastball better than they hit the curve ball. Data shows that pitchers have a tendency to throw fastballs when the count is in the hitters favor (hence the name hitters count). So when you find yourself in a hitters count, expect a fastball.

However, one method to get hitters to get themselves out is for a pitcher to throw a curve ball in a hitters count fooling the hitter. As a hitter, if you have a hitters count (let's say 2-0) and the pitcher throws a curve (or other off speed pitch) do not offer at it. At worst the count is 2-1 and remains a hitters count. The following pitch will likely be a fastball for two reasons: pitchers tend to throw fastballs in hitter counts and pitchers rarely throw the same off speed pitch in sequence i.e. curve ball, curve ball.

C) Narrow your plate coverage to play the percentages- Few hitters can control both sides of the plate consistently thus hitters must make a choice of which to give up. Over 70% of pitches in the strike zone are from just inside the midway point of the plate to the outside corner. Many more outs are made on the outside part of the plate. In fact, with runners in scoring position, pitchers will work the ball away (outside part of the plate) to avoid giving up a double in the gap or HR. I instruct my players to expect the ball "middle-away" and react to it "inside". 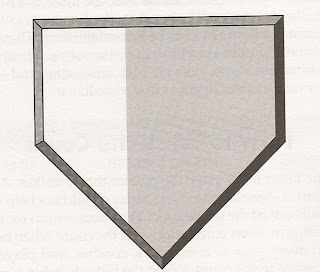 D) Predict pitch type and location based on data and tendencies- Baseball players hit fast balls better than they hit curve balls. Pitchers throw fastballs in hitters counts. Pitchers also throw a majority of their pitches on the outer half of the plate. If we use these facts in conjunction with the known tendencies of the players/coaches, we should be able to predict the pitch and location based on the count on the batter and runners on base.

For example, a batter has a 1-0 count. He should expect to swing at the next pitch which he predicts will be a fastball away. If he receives an off speed pitch or a pitch outside the strike zone, he does not swing. If he receives the pitch he expects in the location he expects it, he is very likely to hit it hard possibly resulting in a hit.

Summary- Hitting a baseball is a very difficult skill to master. To improve the probability of getting a hit the batter must have an aggressive ("go") swing thought, hit the pitchers fastball when the count is in the hitters favor, narrow the plate to play the percentages, and anticipate/predict the pitch and location based on tendencies.

Have a game plan for hitting. Use this approach on every at-bat to improve your chances to succeed. You now have the information, put it to work for you. Have discipline, confidence, and commitment to the hitting approach and improve your performance.
Posted by Michael Monsour at 12:44 AM